MEDARDO Cardinal Mazombwe of the Catholic Church has made some progress since his admission to Morningside Clinic in South Africa last Wednesday, as he is now able to speak clearly. Cardinal Mazombwe has continued undergoing diagnostic tests, although the doctors attending to him are yet to determine the actual causes of his illness, a spinal problem. First secretary for press at the Zambian High Commission in South Africa Patson Chilemba, who confirmed the development in a statement issued yesterday, said Cardinal Mazombwe is in a stable condition. Mr Chilemba, however, said while the doctors are still doing their tests, the nation is in the meantime urged to pray for the quick recovery of the cardinal. Government last Wednesday evacuated Cardinal Mazombwe for specialist medical treatment. 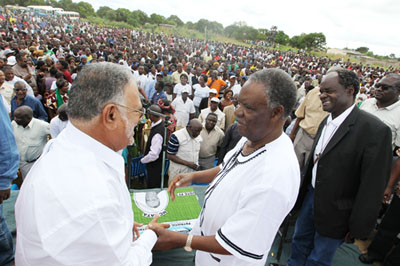 I don’t know the key to success, but the key to failure is to try to please everyone.